60 Years Ago Today, The Long Goodbye is Published

In 1953, after several years of struggle, Raymond Chandler's novel, The Long Goodbye, came to print. He wrote the book while nursing his wife through an extended illness, which eventually took her life. It had a profound impact on Chandler. His last years alone were marked by alcohol abuse and loneliness. 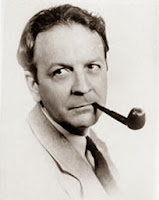 The Long Goodbye is one of Chandler's most personal stories, and he put a lot of his own suffering into the characters. He told his agent, "you could not know the bitter struggle I have had in the past year to achieve enough cheerfulness to live on, much less to put into a book."

Anthony Boucher gave the book a rave review in the New York Times, and declared it one of the best private eye novels ever written. Today it is recognized as a classic work of art and helped cement Chandler's reputation as a great writer. In 1955 the Mystery Writers of America awarded The Long Goodbye an Edgar for Best Novel.


"To say goodbye is to die a little."

from The Long Goodbye
Posted by Picks by Pat at 10:03 PM