On Veteran's Day Help A Warrior Tell His Story

He was still a teen when he enlisted the army. By the time the war ended two years later, he'd seen brutal combat in the Battle of the Bulge, won three medals and been badly wounded. He saw fellow soldiers treat Native American warriors with contempt, and it made a lasting impression on him when he returned home. 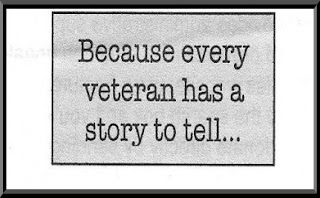 He got employment as a journalist and professor. In his spare time he began writing fiction. Deeply influenced by the Indian culture of the Southwest, he wrote his first novel about a Navajo tribal policeman. Although his first agent urged him to dump the "indian stuff", he persevered, and won an Edgar Award for Best novel with his third one, Dance Hall of the Dead. He went on to write 18 mystery novels, many of them best sellers.

His name was Tony Hillerman. And he was a veteran.

As the wars in Afghanistan and Iraq wind down, hundreds of thousands of veterans have returned home. Many of them have seen horrific combat and witnessed the death of close friends. Although their physical wounds will disappear in time, the emotional scars often remain. For many of these vets, writing down their experiences may be the best way to heal and move forward with their lives.

The Veteran's Writing Project is helping vets tell their stories, so that they can re-integrate with society and their families and neighbors. Donations to their organization are tax deductible.

Perhaps the next Tony Hillerman will emerge from their workshops. You can read more about them in this New York Times article, Warrior Voices.  Are you a teacher? You can also read about how to conduct a successful writing workshop for veterans.

Either way, your support can make a difference for our veterans. They deserve it.