On this Memorial Day, I'd like to pay a special tribute to those troops who serve as Combat Medics, Corpsmen and Doctors. These men and women do something extraordinary. They run towards danger to provide help to our fallen wounded when saner folk would run the other way. Many of them serve as conscientious objectors. Desmond Doss was one of them. 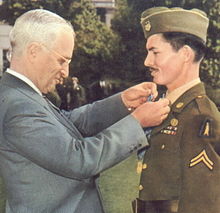 He served in the Pacific during World War II. Refusing to carry a weapon because of his religious beliefs, an officer once tried to have him discharged based on mental unfitness, and fellow soldiers harrassed him in training. During a battle on Okinawa, dozens of soldiers were wounded, and Desmond risked enemy fire to retrieve all of them and carry them to safety unaided. A few weeks later he was wounded and treated his own injuries rather than call for assistance and risk another man's life. During his rescue by fellow medics five hours later, they came across another badly wounded soldier. Desmond moved off his litter and ordered the medics to attend to the other man first. He was wounded again by a Japanese sniper bullet which shattered his arm. He fashioned a splint from a rifle stock and crawled 300 yards to an aid station and safety.

Two things struck me after reading about this man. He was a genuine hero, and he was as tough as nails. A lot of his fellow troops thought so too. Desmond Doss was awarded the Congressional Medal of Honor, the first medic so honored, and one of three who have won the award.

You can read more about Desmond Doss and other courageous men and women in a book by Mark Littleton and Charles Wright entitled Doc: Heroic Stories of Medics,Corpsmen,and Surgeons in Combat

Their courage and self-sacrifice is an inspiration to all of us. We wouldn't be a free nation without them.