Could Dolphins Play Hide and Seek With A Nuclear Bomb?

I read a story in the paper this past weekend about a dolphin finding a very old piece of military hardware off the coast of California. Seems the sleek mammal, trained by the U. S. Navy to find underwater mines, uncovered a torpedo from the 19th century! A dolphin named Ten found a Howell torpedo, which was produced sometime between 1870 and 1889. The weapon was presumably lost during testing more than 120 years ago. According to the Navy, dolphins possess the most highly attuned sonar senses on the planet, even exceeding the best designs of our billion dollar ships. Which is why we're still using them to hunt for underwater mines, protect our navy bases and look for enemy frogmen who might try to scuba dive into one of our ports for a terrorist mission. The animals were even deployed during the Iraq war in 2003.

All this got me to thinking. If dolphins could find a 528 pound torpedo buried at the bottom of the sea after 120 + years, could they be used to find a 7,600 pound thermonuclear bomb buried in a few dozen feet of water? Heck, I'd think they could. If we had any missing atomic bombs lying around.

Nuclear bombs, that is. Lying off the Atlantic coast...with enriched uranium cores.

But hey, don't worry! The government says they're intact and pose no threat to our way of life, or the millions of people living on the Eastern Seaboard. They were lost during training missions in 1957 (Delaware) and 1958 (Georgia).

I'm sure the residents of Tybee Island, Georgia and Cape May, New Jersey will be glad to hear that. After all, when was the last time our government lied to us?

The Navy has been thinking about retiring their dolphins over the next several years. Maybe we should be thinking about using them for a new mission. Have they considered using these natural sonar wonders to search for missing bombs? Might be a waste of time, but I wonder if anyone has even done a study to see if recovering these weapons is possible using trained dolphins with the best sonar senses on the planet? Might be worth a few dollars. After all, a few hundred pounds of highly enriched uranium would be awfully valuable to our enemies, if they could find these weapons. Shouldn't we find them first?

And even if this turns out to be a dead-end, as far as the Navy goes, wouldn't this be a great idea for a thriller novel? I'm too busy for something like this, but maybe there's a writer out there who could make a story out of it. 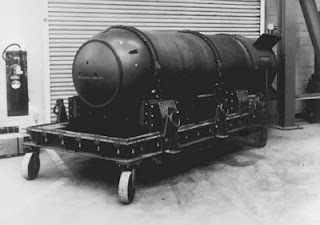