Let's Not Forget The Missing

As we celebrate the freedom of three young women in Cleveland, released from captivity after more than ten years of living hell, let's keep in mind a simple truth.

Ashley Summers is still missing. She disappeared in the same neighborhood where the other girls were kidnapped. When will she be found?

Around the country, there are tens of thousands of missing persons, and 40,000 unidentified, unnamed dead buried without identification, without a family to claim them, or be notified of their loss.

This silent story was first brought to my attention by Sarah Weinman, news editor of Publisher's Marketplace, through a posting on her website entitled The Plight of the Unidentified. In it, she discusses efforts by a group called the Doe Network to identify the missing. Teaming up with NamUS, a database of missing persons, the Doe Network is making it easier to search for missing persons, in the hopes that their families may learn their fate.

Visit their website. Look at the pictures of the missing in your area. See a familiar face? Tell someone. And let's bring Ashley Summers home. 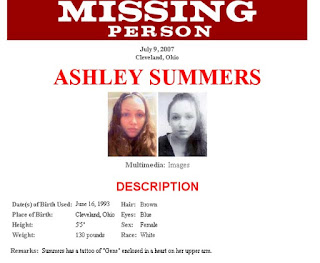