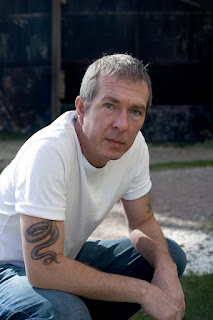 It's the birthday of James Thompson, born October 16, 1964 in Kentucky. In his short life he wore many hats, one of the reasons his writing has such an enormous impact. He knew his characters, both the mighty and the fallen. His Inspector Kari Vaara novels have set the standard for Finnish Noir. They explore the dark side of Finnish society that few see; topics like prostitution, racism and alcoholism.

Before publishing his first novel, he was a bartender, a soldier, a construction worker, a coin dealer and a photographer. In 1998 he moved to Finland and got his master's degree. He learned Finnish and spoke other languages as well. But it was Finland that changed him, and where he gained his success as a writer.

A chance encounter with a major European publisher in 2008 lead to his first contract and first published novel. In 2009, his second novel and the first of the Inspector Vaara series was published. Snow Angels became his breakout novel, and was nominated for several awards, including the Edgar Award.  Thompson's fictional hero has been compared to Harry Bosch and John Rebus.

Thompson followed this up in 2011 with Lucifer's Tears, which proved that he was no one-hit wonder. It garnered multiple starred reviews. Booklist declared it was "impossible to put down", and Kirkus called it one of the best novels of the year. 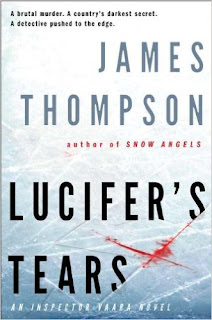 And yet, it almost didn't make it to the printed page. No one knew it at the time, but Thompson was suffering from crippling migraines. A doctor suggested a change of scenery with more sun. Thompson left Finland for Spain, where he plugged away at the novel. Halfway through, he tossed it in the garbage and started again. The climate in Spain didn't help his illness, but he forced himself to continue on the new draft.

As he put it, "The number of hours I was well enough to sit at the keyboard and write was limited, so I would lie down and imagine the next scenes, and write them out when I was able. The worse I got, the worse Kari got. I wrote in long bursts. The last fifteen pages were typed in one day. I remember typing THE END, and feeling both relieved that it was over, but it’s a harsh novel. I was afraid I had gone too far. I had, however, for good or ill, written the book that I wanted to write.

I sent it to my agent. He told me it was a huge step forward in my growth as a writer. There’s a lesson in there, but I don’t know what it is."

More Vaara novels followed, Helsinki White in 2012 and Helsinki Blood in 2013. His works have been translated into twenty languages and are available around the globe. He also edited and contributed to Helsinki Noir, a collection of noir short stories published by Akashic Books.


“Finland, the myths and truths. Internationally, it has a reputation as perhaps the best place in the world to live. A great economy. A low crime rate. There is some truth to this, but like every country, Finland has many truths . Finland is, like the theme so often explored in Star Trek, a parallel universe in which, on the surface, all seems normal, but under that shell lie vast differences . . . "