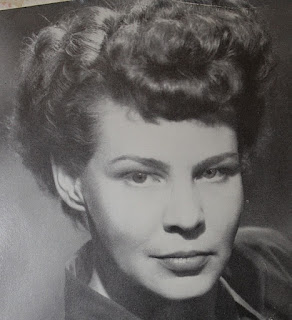 It's the birthday of Helen Nielsen, born October 23, 1918 in Roseville, Illinois. She studied art and drafting before the outbreak of World War II. During the war she worked in a California airplane factory helping to design bombers and fighter planes, including the P-80, one of the first jet fighters.

After the war she stayed in California and wrote for several television shows, including Perry Mason and Alfred Hitchcock Presents. As a way to amuse her nieces and nephews, she would sometime use their names in a TV script to delight the kids.

When not penning scripts for TV, she wrote short stories and novels. Her first novel came out in 1951, The Kind Man, and her second, Gold Coast Nocturne, was made into a movie called Murder By Proxy. 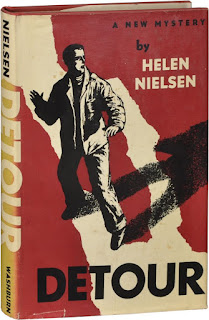 Thanks to the growing interest in the mystery genre Domestic Suspense, some of her work is coming back into print. Two of her novels were reprinted by Black Lizard, Detour and Sing Me a Murder. Prologue Books has made many of her novels available as ebooks.

Her short story, Don't Sit Under The Apple Tree, was included in the widely praised anthology Troubled Daughters, Twisted Wives, edited by Sarah Weinman.
Posted by Picks by Pat at 10:57 PM