Don't look away from Blind Spot 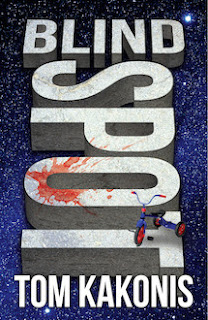 Odell DeCruz (aka Dingo), fancies himself a criminal mastermind with great ambitions, a modern day Moriarty. Marshall Quinn, a college professor, lives comfortably in his insulated world with wife and child. One day the lives of these two men intersect, and nothing will ever be the same again. And not just for these two polar opposites. Odell is not the only criminal and Marshall not the only victim in this tense drama.

Tom Kakonis has written a suspense thriller packed with desperate hopes and stolen dreams. The reader sees, hears and smells the blue collar bars that pepper industrial Chicago, its bucolic suburbs and sad, gray police stations where detectives pursue dead end leads in a desperate search for a little boy. Kakonis uses his brush with expertise to paint a startling canvas that reveals the hidden world of child trafficking.

When Marshall Quinn takes his toddler to an amusement park he doesn't expect his day of relaxation to turn into a nightmare. But that's what happens when little Jeffie disappears. It's every parent's worst fear. Driven by guilt, Marshall canvases the city with posters and pictures of his stolen son. After weeks turn into months it seems futile. Then a chance encounter at a freeway toll booth give Marshall and his wife hope. A woman in a Mercury next to his glances at the poster in Marshall's window and with widening eyes mouths the words, "I know that kid."

The car vanishes, but Marshall is now convinced that someone has seen Jeffie. Using a partial license plate, a bumper sticker and a description of the vehicle (not enough, according to the detective working his son's case), Marshall combs the industrial parks and factories on the tough side of town as his wife Lori begins to emerge from the paralysis of her grief. Marshall's out of his element, but a brutal beating by one of Dingo's henchmen isn't enough to dissuade him.

What he doesn't bargain for is the fact that the Norma and Buck, the couple that adopted Jeffie on the black market, may not want to be found, even as their suspicions are awaken. They've already lost one child. They're not going to lose another, regardless of who gets hurt.

As for Dingo, this may be just a business deal, but in his line of work, there are no refunds or returns. He'll do whatever it takes to remove this "little problem" that could land him behind bars for a very long time.

As these three forces threaten to collide in a final confrontation, you'll be holding your breath until the very end. Just don't take your eyes off the page. Blind Spot packs a punch that strikes you right in the gut.
Posted by Picks by Pat at 6:40 PM