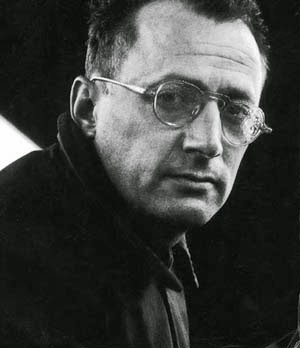 It's the birthday of Nelson Algren, born March 28, 1909 in Detroit. He grew up in a poor ethnic neighborhood in Chicago and his fiction revolved around men and women who lived in the margins of society.

It started with a stolen typewriter, which landed him in a Texas prison. After he was released, he mined this episode to produce some of the most powerful fiction of the 20th century.  When asked who the best writers in America were, Ernest Hemingway named Algren second only to William Faulkner. "You should not read it if you cannot take a punch," Hemingway noted in reference to Algren's fiction.

Algren doesn't pull any punches. At a time when America was celebrating its postwar prosperity in the late 1940s and 50s, he wrote about con men, swindlers, corrupt politicians and petty criminals. His second novel was banned in Chicago, but his third, The Man With The Golden Arm, won the National Book Award. It was made into a movie starring Frank Sinatra and broke a film taboo with its depiction of narcotic use.

“A certain ruthlessness and a sense of alienation from society is as essential to creative writing as it is to armed robbery.”

I remember the movie, Man With the Golden Arm. I didn't know the story behind the author. Thank you, and thanks for posting your link on Janet Reid's blog. I'm glad I stopped by.

Thanks for visiting! I learned a lot about him in researching this post.