A woman who reported her car was stolen thought she'd never get it back as the months went by with no word from the police or the Department of Motor Vehicles. But she decided to call the DMV as a last resort, to see if they knew anything.

Their answer? Oh yeah, we know where it is...at a car dealer. They put it up for sale!

Erica Battle wasted no time claiming her vehicle, but was shocked to learn that no charges could be filed against the dealer. The business apparently send her a letter after towing the abandoned auto, but it came back Return To Sender, so they decided to sell it.

To add insult to injury, the charges against the thief were dropped because he was a cousin of the woman's boyfriend, who had permission to borrow it. Blood, apparently, is thicker than evidence.

Read more about this shady outcome at Channel 6 in Portland, Oregon.

A woman whose sister was murdered signed a contract with a company that specializes in crime scene cleanup just hours after learning of the loss of her sibling, and later got another shock when the bill 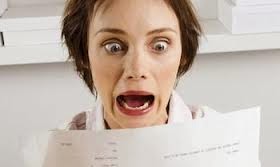 $56, 909 dollars for the cleanup. When the insurance balked at paying the hefty bill, the company put a lien on the murder victim's home.

The company, Aftermath, has been fined numerous times in the past for violating consumer protection laws in Ohio, according to the attorney general, but apparently they haven't learned their lesson. The claim was eventually settled and the local police department has been instructed not to recommend the company anymore.

News Net 5 in Cleveland has more on this shocking story.

A rapist who fled the scene of the crime crashed his car and was killed after the victim managed to escape the car and alert police.

You're smiling aren't you?

Excuse me, I should say, alleged rapist. After all, the suspect hasn't been convicted in a court of law. Although I have a feeling that he'll be facing a higher court now, where the truth will emerge and all judgements are final. Read more about the case at PhillyConfidential.