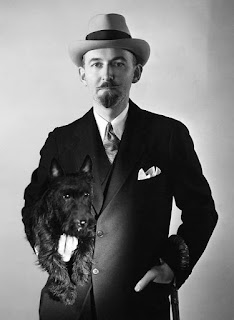 It's the birthday of Willard Huntington Wright, born October 15, 1888 in Charlottesville, Virginia. He wrote under the pen name S.S. Van Dine, in part because he was too embarrassed to admit to his high brow friends that he had stooped to writing "detective fiction". He created the dapper amateur detective Philo Vance, who was an immediate hit, both in print and on the silver screen, portrayed by such actors as William Powell and Basil Rathbone. Few people living today have ever read one of Van Dine's novels or even heard of him. Yet for a brief period of a dozen years, be was one of the most widely read authors on the planet.

Wright began his career as a critic, first for the Los Angeles Times and later for Smart Set, a jazz age magazine owned by the great writer H. L. Mencken, one of Wright's literary influences. Although Wright was known for his scathing reviews of romance and detective fiction, he never achieved the fame he felt he deserved, and after a series of personal and business setbacks, he was ordered complete bed rest by his doctors to deal with his drug abuse. 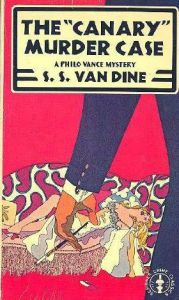 Bored, he began reading detective novels by the dozen, and to his surprise, found some of them quite entertaining. He decided to try his hand at a couple, but aware of his own reputation for slandering the mystery genre, came up with the pen name S.S. Van Dine to disguise his authorship. He created Philo Vance, a protagonist modeled after himself, or at least, how Wright saw himself...educated, cultured, wealthy, and an expert on any number of subjects, a man to admire with his fancy clothes and monocle. He was the perfect detective for the jazz age, a model for the boom years when it seemed everyone was destined to become wealthy and wise. First with The Benson Murder Case and the blockbuster The Canary Murder Case, Van Dine's writing formula was a hit. By the time the third Philo Vance novel was published, Wright was as rich as his main character. So popular were his books that they helped keep his publisher from going out of business during the Depression.

Wright even penned a guide for other writers with an essay he published called Twenty Rules For Writing Detective Stories. It holds up well and still has some good advice. Van Dine influenced many other writers of the mystery genre, perhaps the most famous being the writers who created Ellery Queen.

Van Dine's novels and trademark character lost popularity as the Jazz Age and the Roaring 20s gave way to the deepening Great Depression. By the mid 1930s his wealthy protagonist began to appear dated and out of place. New writers, such as Dashiell Hammett and James Cain emerged with a gritty, realistic style that caught the public's eye. By the time the last Philo Vance novel, The Winter Murder Case was published in 1939, Van Dine's literary shooting star had burnt out. And not just his career was over. He died on April 11 of that same year from heavy drinking and heart disease.

"There simply must be a corpse in a detective novel, and the deader the corpse, the better."

This is the precise weblog for anybody who needs to seek out out about this topic. You notice so much its almost arduous to argue with you. You positively put a brand new spin on a subject thats been written about for years. Nice stuff, simply nice!