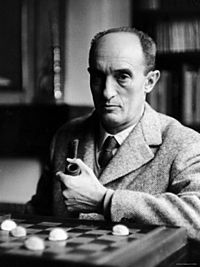 It's the birthday of Pierre Boulle, born February 20, 1912 in Avignon, France. In a career that spanned nearly half a century he wrote more than two dozen novels and dozens of short stories. Two of his novels were made in epic films with instant name recognition, but almost no one remembers the author himself.

Boulle worked on a British rubber plantation in Malaysia during the 1930s. When World War II started, he became a secret agent working aginst the Japanese. After the war ended, he returned to France and began writing. Early in his career, he was so poor he was forced to live with his sister.

That changed with success. He used his wartime experiences to create his first best-selling novel, The Bridge on the River Kwai. The story was made into a popular film starring Alec Guinness, and won seven Oscars.

He later achieved even greater success with a 1963 science fiction novel unlike anything seen since the days of Jules Verne.  La Planète des Singes was an international best seller that was made into an Oscar winning film in 1968, the first of seven movies based on the same book. The first English translation was called Monkey Planet, but we know it by it's American title - Planet of the Apes.
Posted by Picks by Pat at 12:01 AM

Email ThisBlogThis!Share to TwitterShare to FacebookShare to Pinterest
Labels: Pierre Boulle, Planet of the Apes, The Bridge on the River Kwai, Writers Born Today